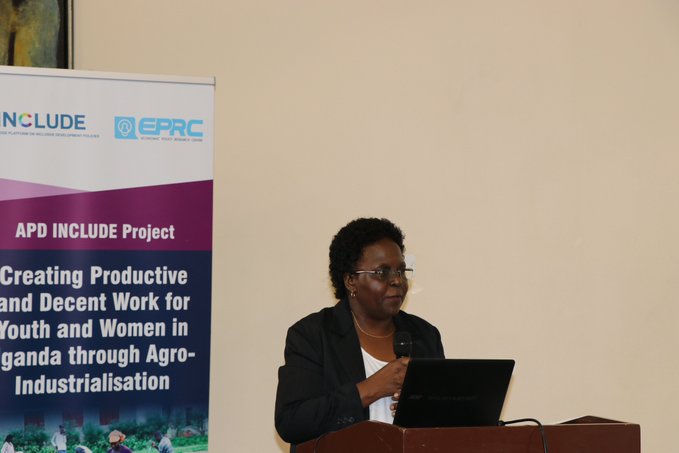 Economic Policy Research Centre (EPRC) has unveiled plans to undertake to undertake a study on “Creating Productive and Decent Work for Youth and Women in Uganda through Agro-Industrialization”(AGI).

According to the centre’s Executive Director Dr. Sarah N.Ssewanyana, the study will be carried out in partnership with the Africa Policy Dialogues under the INCLUDE Knowledge Platform. The knowledge platform was established in 2012 by the Netherland’s Ministry of Foreign Affairs to promote inclusive growth and the use of knowledge at international levels of policymaking.

Dr.Ssewanyana said at the opening of the project inception meeting for the targeted stakeholders held at Potea Hotel, Kampala on Thursday, November 7, 2019, that the AGI strategically links agriculture to industry in a bid to create more employment. This presents an opportunity for government to retrofit its employment related interventions for youth and women. She observed that for the past 20 years, Uganda has recorded consistent positive economic growth with limited creation of productive and decent jobs, however fewer youth and Women have benefited.

For the new jobs created, the ED noted, fewer youth and women have benefited from such opportunities. Due to the failure to create a significant number of productive jobs, unemployment and underemployment rates are high—especially among the youth aged 18-30.

To address this challenge, the Government of Uganda (GoU) for three consecutive financial years (i.e. 2017/18, 2018/19 and 2019/20) has focused its budgets towards “Industrialization for Job Creation and Shared Prosperity”. The government has also allocated a significant amount of resources to the implementation of specific youth and women initiatives such as the Youth Livelihood Program (YLP) and Uganda Women Entrepreneurship Program (UWEP). However, such initiatives are yet to lead to reduced unemployment and underemployment.

The limited employment opportunities have also created avenues that have led to the rise in labour externalization. As another avenue for absorbing the young population and women in decent and productive work, Government has embarked on an Agro-industrialization (AGI) agenda. It is within this context, that Economic Policy Research Centre (EPRC) seeks to contribute towards identifying opportunities, sources of productive and decent employment, and effective strategies

For the past 20 years, Uganda is among the countries in Sub-Saharan Africa that have recorded consistent positive economic growth with limited creation of productive and decent jobs. that promote job creation and inclusive growth along the selected commodities within the AGI value chain.

The objectives of the inception meeting were to create awareness on the overall AGI agenda and its viability in employment creation for both youth and women; identify and prioritize the most appropriate AGI value chains that have the highest back and forward linkages towards creation of productive and decent employment and to Understand the existing policy environment, the primary actors and drivers of change in the externalization of labour and their implications on AGI agenda.

The main expectation of this this project is to influence the National Employment Policy (2011) on 3 out of 10 policy action areas. The evidence will guide this engagement on the potential employment opportunities for youth and women along the strategic AGI value chains and the challenges and opportunities labour externalization poses for sustainable AGI. The specific project outcomes are: employment opportunities identified that enhance sustainable productive and decent jobs for youth and women along the AGI value chains, strengthened collaboration and awareness of the AGI value chain approach in the creation of productive and decent employment for youth and women across the key stakeholders plus Labour externalization policy guidelines revised with proper targets set in conformity with government’s plan for implementing AGI in Uganda.

Dr.Madina Guloba a senior research fellow made a presentation to the meeting during which she argued that there was need to reduce the informalities in doing business. She added that labour externalization could be linked to agro-industrialization with more investments in farming technologies, agro-processing and promoting market information and access. She also called for identification and implementation of effective strategies to create jobs along the key commodities value chains as well as streamlining guidelines for labour externalization.

During the meeting,Mr. Ronnie Mukunda  from the Uganda Association of External Recruitment Agencies(UAERA)  said labor externalization was not as bad as people tend to perceive: Uganda receives remittances worth USD 1.3 billion  per year from immigrant workers and USD 700 million specifically from those in the  Middle East countries. He added that Uganda has bilateral agreements with Jordan and Saudi Arabia while UAE is soon coming on board.

Mr. Sam Ogwal from the National Youth Council decried the lack of adequate extension services to the farmers, a stable market for farmers produce and land, which is expensive and cannot be afforded by the vulnerable groups.

Ms. Prossy Busagwa a principal researcher from the Parliament of Uganda observed that the issue of land ownership and grabbing ought to be addressed if farming and agro industrialsation is to be achieved as a stepping-stone to create employment for women and youth.

Members also discussed  the type of skillsets  available and what is required to bring on board the two groups in the value chains; and for the migrant workers, what resources and skills can be brought back home to help take advantage of job opportunities in the selected AGI value chains.