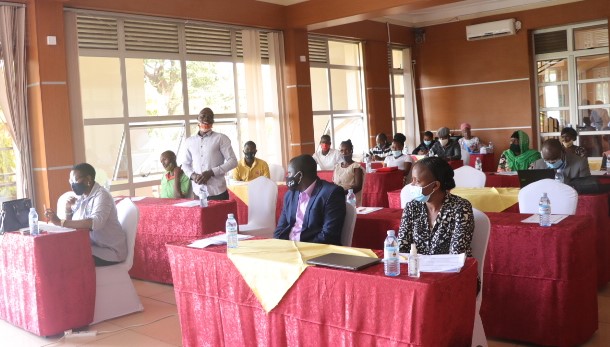 People eking livelihood in the fisheries sector in Eastern Uganda have expressed hope that the drive for agro industrialization in the sector may open up more opportunities, skills for women and youth.

In the town hall dialogue held on December 14, 2020 at the Source of the Nile hotel in Jinja, attendees – women, youth and men – discussed ways in which they can be supported to add value to fish, gain skills and earn more from the fisheries sector.

The town hall was organized the Economic Policy Research Centre (EPRC) under the Creating Productive and decent work for youth and women in Uganda through Agro Industrialisation project funded by Include.

The half-day town hall Baraza for actors in the fishing sector was majorly to solicit a discussion on how the sector can plan a big part in the agro-industrialization agenda for the country in the five years.

For instance, it explored the importance of the sector as an employer which is likely to grow with continued transformation of food systems and growth in domestic demand for food largely driven by urbanisation and growth in population. Government grapples with unemployment of its young people. Agro-industrialization can add descent jobs.

Dr. Swaibu Mbowa, a senior research fellow at EPRC, said the discussions focused on how it will help the youths and women in the fish value chain. He said this would feed into how this will help in the industrialization drive spelt out in the National Development Plan (NDP III). Fish was identified as a key product in agro-industrialization.

Some of the participants demonstrated that they were already adding some value to their fish and had witnessed improvement in the uptake of their products and consequently their incomes.

Kiyindi women fish processors association is one such group that has experienced this due to minimal value addition on the fish.

Perus Logose, the director of Kiyindi women fish processors association, told the town hall: “We started this group to reduce on the post-harvesting losses which we were incurring especially on the Mukene.”

“We make products such as snacks from fish that can be an accompaniment to tea, we also make fish powder targeting the sick that can’t chew and the children. We make fish paste and then we smoke mukene in favour of those who don’t like oils.”

She added that “We also went into another technology using the modern smoker kiln which sieves off the cancer smoke [from the fish]. Our incomes have improved and we can be invited in meetings like these ones. And the consumption of silver fish has improved.”

For James Katari, Buikwe district fisheries officer, value addition investment opportunities are abound. He said cage fish farming is one such activity that people have not embraced but it can help this country in terms of employment, boost incomes if each one of us can embrace it.

Dr Winnie Nkalubo, the director of research at the National Fisheries Resources Institute (NaFRI), said the perceived gender roles are some of the issues that hinder women participation in the fishing industry.

She said most of the times, women are expected at home in the night to take care of family and children yet much of fishing takes place in the night.

She said NaFRI was were exploring ways to make fishing rigs cheaper for the women to afford them to help their participation in the sector.

Elizabeth Birabwa, the EPRC Programmes Manager, said there was need for interventions to be designed to tap into the indigenous knowledge, modify or improve it and pass it on to others.