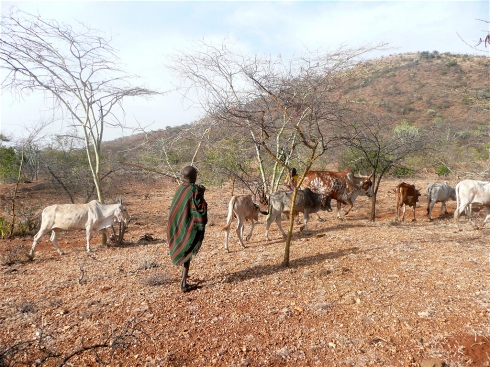 Drought is a growing global concern due to its debilitating effects on livelihoods. Globally, drought has affected more people, compared with any other natural hazard, and its adverse effects have more than doubled in the last four decades. In any given year, approximately 55 million people globally are affected by drought. In Africa, drought affects an average of 14% of the people living in drylands and about 75% of the area used for agriculture — which are home to about 50% of the population. The situation is likely to be exacerbated by ongoing climate change. The frequency and intensity of extreme weather conditions is growing rapidly (e.g., high temperatures).

The effects of drought in Uganda

In Uganda, drought is the most challenging climate hazard, and it has devastating effects on food security. This is because almost 70% of Ugandans rely heavily on farm production for food and income.

More succinctly, in 2017, when Uganda experienced severe drought, about 10.9 million people experienced food insecurity, with 1.6 million at the brink of starvation. Such drought resulted in low crop and livestock yields, reduced availability and access to safe water for both human and livestock consumption, and reduced household health and nutrition.

The adverse impact of drought on food security is likely to be greater for households with weak resilience capacities. This implies that more resilient households can better withstand the adverse effects of drought on food security. In this regard, building resilience is critical for preparedness, mitigation, recovery and adaptation to drought. Resilience is also critical because it allows the understanding of household vulnerabilities and the strategies, they adopt to manage shocks.

Cognizant of the role played by resilience, the government of Uganda and other stakeholders have undertaken initiatives to build household resilience. For example, the Social Assistance Grants for Empowerment (SAGE) and the Northern Uganda Social Action Fund aimed at developing resilience capacities of vulnerable households. However, these interventions are not directly targeting the impact of drought on food security. Additionally, the initiatives were ex-post approaches to building resilience, as opposed to ex-ante approaches, which place households in a better position to shield themselves against the impact of any shock before it occurs.

The study “How Specific Resilience Pillars Mitigate the Impact of Drought on Food Security: Evidence from Uganda,” identified adaptive capacity as the resilience pillar with the highest mitigating power on the impact of drought on food security. Adapting to a shock involves making appropriate changes in order to better manage or adjust to the changing situation. The study further identifies the most important components of adaptive capacity. For example, linking social capital (which relates to the quality of services provided in a household’s community, such as roads, veterinary services and agricultural services) and access to information is the most important factor. Nonetheless, some aspects of transformative and absorptive capacities, such as access to communal resources like land, and informal safety nets (respectively) are also critical in mitigating the adverse impact of drought on food security.

What does all this mean?

First, to enhance preparedness and adaptation, it important to invest in early warning systems and to enhance access to climate-related information by vulnerable groups. Second, it is also important to rejuvenate and support informal institutions, such as women’s groups, saving groups, mutual help groups, agricultural cooperatives and other community-based organizations (CBOs). Third, government and development partners should work directly with informal institutions to reach beneficiaries of various interventions, as opposed to working directly with individual beneficiaries. Finally, to realize sustainable impacts, the effectiveness of these groups should be enhanced by strengthening the linkages between financing and skills components. The adopted Parish Development Model presents an opportunity to leverage informal institutions by channeling financial support through these groups. Agriculture cooperatives need to be encouraged to support households that rely on agriculture for their livelihood.

Government might also intervene in the protection and maintenance of communally shared resources, such as communal cropland, forests, water sources and irrigation schemes, among others. Government also needs to actively engage local authorities to develop mechanisms that enable access to these resources by vulnerable groups. In addition, agriculture extension services need to be enhanced by recruiting extension officers in areas where they are nonexistent and adequately facilitating them to aid in adoption of improved agricultural practices and provision of improved inputs.

This article is an outcome of the STAAARS+ fellowship of the Food Security Policy Research, Capacity and Influences (PRCI) program of the USAID Feed the future initiative administered by Michigan State University, Cornell University and the International Food Policy Research Institute. This research is supported by the PRCI