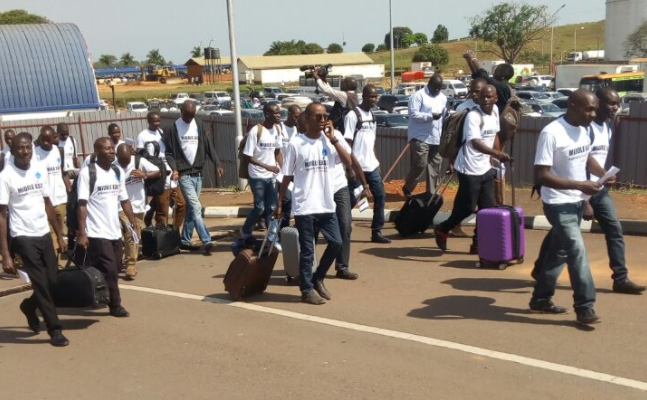 Prof. Wasswa Balunywa said that while externalization was one solution to higher unemployment, it had several challenges and “showed weakness in your own economy.”

“If you are producing people you cannot employ, there’s a problem. We’re even taking the best out of the country,” Balunywa said while giving a key note speech at a policy dialogue organised by the Economic Policy Research Centre and INCLUDE Platform.

The dialogue, which took place on December 15, 2021 in Kampala discussed the extent of labour externalization in Uganda and how the returnees can be helped invest in the agro-industrilization value chains in the country.

Prof. Balunywa said that “finding somebody with a degree going to become a maid somewhere was because we’re unable as a country to go and negotiate at a political level to see that Ugandans who are well educated go out and work in a decent way.”

Dr. Ibrahim Kasirye, the EPRC Director of Research, said some 629,000 Ugandans work as migrants in different countries, most of whom were living in Kenya, Rwanda, and South Sudan in 2013. He said that that Saudi Arabia, UAE and Iraq have particularly seen a surge in Ugandans searching for jobs.

Dr. Madina Guloba, while presenting findings from the fish and cotton value chains, showed that there were opportunities in these products for investment for Ugandans who have been fortunate enough to earn some money through labour externalization.

However, the issue of safety of Ugandans going abroad was highlighted prominently. Agnes Igoye, the Deputy National Coordinator, Prevention of Trafficking in Persons in the Ministry of Internal Affairs, said some of those going out are robbed of their dignity.

“Some of them go with suitcases and return with Kavera. Externalization [of Ugandan youths] is not their choice. People are moving because they are desperate for the job,” she said

She said Uganda needed “to leverage on regional agreements/approaches.”

“You cannot negotiate bilateral labour agreements as Uganda alone. There are unequal power relations. What IGAD has done is now a model agreement like eight countries that come together and negotiate as a bloc and then leverage on that,” she said.

Hilary Talemwa, the head of Labour Externalization at the Ministry of Gender and Social Development, said Uganda needed a comprehensive policy to integrate the returnees into the Ugandan economy.

Wandera Emmanuel from Ministry of Foreign Affairs said Ugandans must get the real picture on the ground in foreign countries before they go.  He warned that the success stories that are being painted just a drop among the unsuccessful stories.

“That’s how we end up with basement of embassies filled up with migrant workers. We need to provide information to our migrant workers before they leave the country,” he said.

On his part, Dr. Marios Obona from National Planning Authority said the role of labour externalization in Uganda could not be understated.

He said: “[this is] a group of people who shed tears of misery but are able to remit something at home. Remittances at household level have a lot of impact at household level. At Macro level, they do a lot great impact in supporting our exchange rate.”

He also reiterated the need to ensure young people going out are protected from schemers and traffickers.

Meanwhile, Dr. Balunywa said Uganda must put attention on skills-based education and focus on to science. He said the country can borrow the Singapore story, fund science education at all levels.

“You cannot reform agriculture without science,” he said.