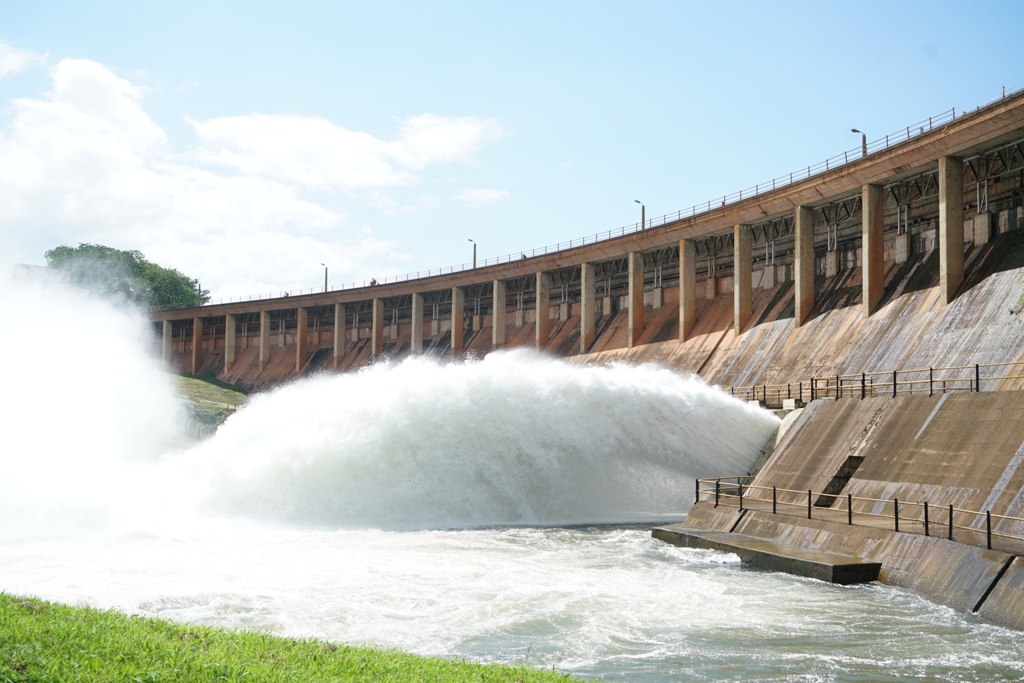 The Bujagali hydropower dam, on the Bujagali Falls, is located on the Victoria Nile on Dumbbell Island, in Jinja. It is an important hydropower project in Uganda and was initially approved in 1994 as the lowest cost option to increase power production in the country with a total cost of its implementation at $800 million thus naming it “Africa Power Deal of the Year 2007” by Project Finance magazine.

Upon its commissioning in 2011, the dam was expected to have an output of 250 MW and boost the slow economic growth, which was at the time attributed to a severe shortage of electricity in Uganda. However, the decline in water levels of Lake Victoria has continuously affected its efficiency.

The construction of the dam leftover 8,700 people displaced, resettled or lost assets. In 2001, some 35 households with about 350 members were resettled in Naminya. Those who refused relocation to Naminya instead moved to Mbiko. These were two resettlement areas where Bujagali Energy Limited (BEL) had an obligation of providing clean water, land titles, schools, a health centre, markets, boats, fishing nets supply and roads but failed. This deprived those who resettled and worsened their living conditions.

The dam has also had a significant and negative impact on local culture. Prior to being dammed, the Bujagali Falls was an important part of one of the traditional faiths of people in Uganda and is named for Jajja Bujagali, a spiritual leader. Tens of thousands of followers, including people from other districts like Kampala, Jinja, and Mukono used to visit this site for spiritual healing. A World Bank Inspection Panel in 2013 established that there was a lack of proper social and environmental assessment before dam construction in addition to exclusion of communities. In particular, the 39th cultural and spiritual leader Jajja Bujagali was not involved in the planning of the project and its construction.

The only stakeholders who were involved in the Bujagali project were private sector project sponsors represented by BEL, the government of Uganda, including the Ministry of Energy and Mineral Development (MEMD) and Uganda Electricity Transmission Company Limited (UETCL), multilateral and bilateral development financial institutions, and commercial lenders, including Absa Capital (South Africa) and Standard Chartered Bank (UK). Other stakeholders included the industrial development arm of the Aga Khan Fund for Economic Development (AKFED) and SG Bujagali Holdings Ltd (Mauritius), an affiliate of US-based Site Global Power LLC.

To mitigate these risks, UNESCO-Convention Concerning the Protection of the World Cultural and Natural Heritage suggests in Article 5 that there is a need to always adopt a general policy that aims towards giving the cultural and natural heritage a function in the life of the community and to always integrate the protection of that heritage into comprehensive planning programmes of projects.

It is on this front that community engagement in the planning of the dam was of paramount interest. Continued neglect of communities in future projects might force the inhabitants where they were displaced to go back, attack, and damage installations made for energy generation.

On the same note, restoration of the Bujagali tradition faith and practice was not accounted for, leading to the end of a symbolic non-tangible heritage value system of the people around the waterfall. In particular, the traditional faith system of worshipers was interrupted by the construction of the dam, yet it would have been preserved with proper engagement of the traditional faith leadership for its continuity amidst the generation of electricity. Similarly, there was disgruntlement among displaced communities where the dam was constructed.

Renewable energy projects of all types (wind, hydropower, biomass, solar, and geothermal) should pay attention to the community interests with a focus on protecting livelihoods, preserving culture, as well as promoting other social realities to reduce any potential conflict triggers in establishing energy plants.

It is of high importance to mainstream the provisions of the convention on safeguarding intangible cultural heritage in planning and implementation of energy projects in Uganda. This will promote heritage connected to people’s meaning of life while the government will continue to use such protected heritage to attract tourists. It’s furthermore important to consider civil society organizations as strategic stakeholders when resettling people in areas identified for energy generation.

The government of Uganda should also introduce commissions of inquiry whenever discontent among communities emerge at the level of implementing new renewable energy-related projects such as wind, hydropower, biomass, solar, and geothermal.

This blog was first published by PRIO